A retrospective on the career of President Rickard: Prez, #2-4 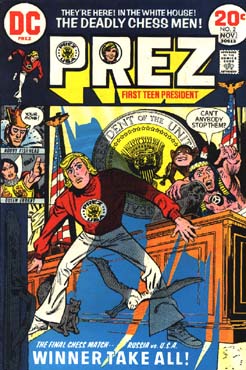 Contrary to the first issue of Prez, the second issue was definitely not “more exciting than anything ever recorded.” It opens with some stock political satire (Prez flies around the world talking of peace, oblivious to the revolutions and insurrections going on), then moves into a straight thriller plot. It appears deranged chess genius Robbie Fishhead (a parody of Bobby Fisher) is unleashing robot chessmen on the capital. But no, it’s actually a scheme by Queen Errant, his Russian rival, disgruntled because Fishhead’s own instability ended their world championship game before she could triumph.

This is the only time they really play with the idea Prez takes place in the near future: chess championship matches are now played with people as their pieces. It’s more interesting for establishing Eagle Free as the head of the FBI. Prez’s buddy is still painfully stereotypical, running the agency out of a wigwam by the Potomac so that he can stay in touch with nature (which he considers was superior for crimefighting than all that silly white man’s forensic science).

Then there’s Prez’ vice president, Martha. She was seen only in outline in#1, but we were told the establishment wasn’t happy with Rickard’s running mate. Online sources identify her as Prez’s mother, but I can’t see any resemblance between her and the brief shot of Mom, nor is there anything in the story to indicate it. So I’m sticking with my assumption from when this series first came out, that she’s Martha Mitchell. Mitchell, the wife of Nixon’s attorney general, became a celebrity due to her role in the Watergate scandal, so it would make sort-of sense to pick her. And that would explain why she didn’t get a last name, which might have pushed the book into legal-liability territory. 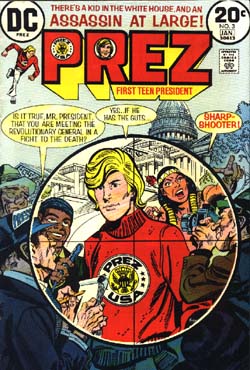 By contrast, the third issue is not only political, it still seems relevant. As President Rickard prepares to sign a strong gun-control bill, radical Second Amendment fans take to the streets dressed in colonial outfits, promising he’ll only get their guns by prying them from their cold dead fingers. Though being Prez, this has some loonie touches, such as the gun-lovers’ leader, a descendant of George Washington, insisting on wearing wooden teeth like his ancestors. The group finances the revolution by counterfeiting $1 bills, which takes more work, but nobody ever checks greenbacks for counterfeiting. While this seems to have a liberal subtext (gun control good!) it ends with Prez calling in the military to take out the revolutionaries, then admitting he’d been naive to think peace, love and flower power would do the trick.

#4 is another off-the-wall one. The US loans money to a small European nation to build a massive irrigation system. Unfortunately they’re bordering Transylvania, so the Transylvanian ambassador (a werewolf) comes to the White House to complain that his country has been sucked dry by the project. Rather than trust to diplomacy, the ambassador has smuggled Dracula (paraplegic from injuries he’s taken over the years) into the White House in a suitcase, to convert Prez to one of the undead. When that plan flops, the backup is bio-warfare, unleashing a swarm of rabid bats over DC. When that fails too, Prez is left pondering whether to rebuild Transylvania, land of vampires, the way the US has helped its other adversaries rebuild.

Apparently this didn’t find the market niche DC hoped for, because that was the last issue (Prez does put in an appearance in Supergirl a few months later). However something about the concept must have clicked for more than a few writers. Ed Brubaker wrote a Vertigo one shot in which Prez’s son searches for his father; Neil Gaiman did a Prez story for Sandman; and Prez is president for life on one of the world’s in DC’s current multiverse. Plus we have a recent Prez comic which tried the same concept marginally more realistically (I’ll review it when I finish it, probably next month). Though as it only ran half its planned twelve issues, I guess teenage presidents still don’t move sales.

#SFWApro. Covers by Jerry Grandenetti, all rights to images remain with current holder.