Because I ran out of space to list them on the weekend, so— 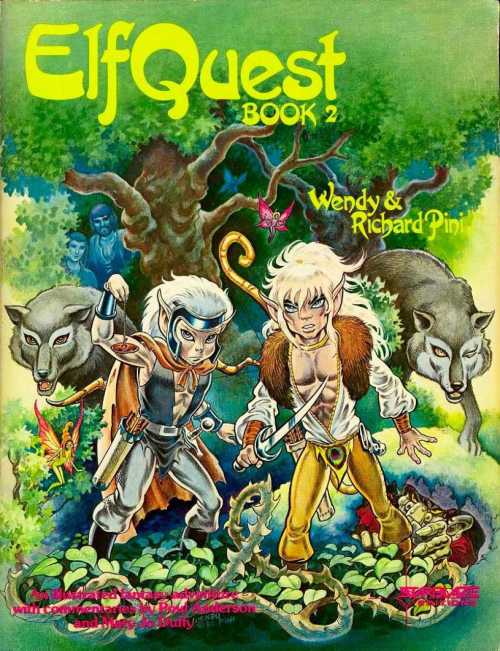 ELFQUEST Vol. 2 by Richard and Wendy Pini (cover by Wendy Pini, all rights to current holder) is a substantial improvement over the first volume: Cutter and Skywise head off from the village to find more evils, while troubling visions eventually send Leetah and Wolf-riders in pursuit. Awaiting them: mysterious butterfly creatures, surprisingly friendly humans and the secrets of Blue Mountain. The Wolf-Riders exploration of the world fits with what the Pinis later described as the theme, not Good vs. Evil but Knowledge vs. Ignorance. It’s always nice when something I loved way back when holds up and this does.

HELLBOY AND THE BPRD: 1953 by Mike Mignla and various collaborators, is the sequel to the 1952 volume, but rather than a single arc, we have multiple stories: Hellboy battles a demon hand, a haunted inn and a possessed witch (in the Mignola-verse, witches are invariably stereotypically evil), then returns to California for a sequel to one of Professor Bruttenholm’s old cases. Entertaining (and seeding a lot for 1954), and already included in my Hellboy chronology.

Still with Mignola, BATMAN: The Doom That Came to Gotham (with pencils by Troy Nixey) is a good Elseworlds in which Bruce must return from years abroad to save his city from Lovecraftian horror. A good, broody yarn with some clever twists on established characters — Penguin as an Antarctic cultist, Ras al Ghul as Abdul al-Hazred — which makes it surprising there’s no Joker (surely he’d have fit into a Lovecraftian nightmare) or Catwoman (an avatar of the Cats of Ulthar say). Still, it worked for me.

HELL YEAH: Last Days on Earth by Joe Keatinge and Andre Szymanowicz has good ideas in this story of a world transformed by the arrival of superheroes and a terrible multiversal secret—but it’s so busy hinting and implying, it never really gets to having a plot or explaining some of what does need explaining. A complete flop for me.

STORM: Make It Rain by Greg Pak and Victor Ibanez manages to focus on issues (is your first duty to your local/ethnic community or the world? How can non-Africans help Africa?) without being too heavy handed, and bringing in a lot of familiar faces (Forge, Yukio, Logan, Calisto) but it gets very repetitive in the first few chapters. The story with the thrill-seeking Yukio is livelier, but annoying—I’m tired of stories showing how old-fashioned super-hero idealism just doesn’t work in tough situations (whether or not that’s what Pak and Ibanez were going for) . I think it might have worked much better read at the one-a-month rate rather than in a single sitting.

SUPERGIRL: Girl in the World by Michael Green, Mike Johnson and Mahmud Asrar isn’t as fun as the first volume, though it’s still enjoyable. The best part is the initial arc in which Supergirl makes her first friend on Earth, tries to adapt to humanity and runs up against the New 52’s version of Superman’s old foe Silver Banshee; the weakest is one in which a nanobot powered agent for Someone goes up against her (it felt like filler, frankly). And I’m less than enthused to see Simon Tycho, Kara’s Luthor counterpart in the first book, show up at the end. Still, the Maid of Might has done much worse.