The Bronze Key: The Other Doc Savage (#SFWApro) 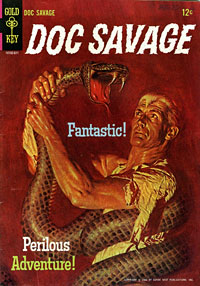 So back in the mid-sixties, when Bantam Books reprints had introduced Doc Savage to a new generation, producers Mark Goodson and Bill Toddman decided to launch a movie series, starting with The Thousand-Headed Man. The film never materialized (as detailed at the first link) because Lester Dent‘s widow actually controlled the movie rights, not Conde Nast which controlled the book rights. By the time the producers found out, they had no time to launch negotiations so they scrapped plans and made a Western instead. But before that, they got Gold Key to put out an adaptation of the novel as a tie-in.

Gold Key, at the time, did tie-in adaptations of pretty much everything. Disney series. TV shows such as Wild, Wild West, Dark Shadows, My Favorite Martians and (later) The A-Team. And films. I never cottoned to them much as a child (I was more a super-hero kid) and while their style worked okay for humorous stuff, it felt very awkward on anything serious. Case in point, The Thousand-Headed Man (cover art by James Bama—it’s a cropped version of his cover for the paperback—all rights reside with current holder) with art by Jack Sparling, script by Leo Dorfman. It’s up on line at Atomic Kommie Comics (hat tip to Pulp Net for the link).

While Sparling and Dorfman did a lot of Silver Age work, none of it stands out.  Sparling appears to have modeled his depiction of Doc’s aides from Bama’s back-of-the-paperback image (which is a good choice) and Doc from the front covers (which unfortunately frequently show him as blond rather than bronze-haired). There’s absolutely nothing to grab the eye, even in a story rife with great images: the mysterious pagodas of the thousand-headed man cult are poorly drawn and the heads (each cultist wears a skintight cloth with hundreds of tiny fake heads shown on) might as well be flowers, or bagels, for all we can make of them (possibly at full size on the printed page they’d be more impressive). Neither Sen Gat nor Indigo is as striking as they were in the book (Indigo, a white guy, is also turned Asian). Habeas Corpus is just an ordinary piglet instead of a freak.

Scriptwise this suffers from the same problem as Marvel’s 1972 series — there’s just more plot than they can fit smoothly into a comic book. We get the big explanation by having Doc hypnotize Sen Gat and his men (way more superhuman than his hypnosis feats in the pulps) after which the villain tells all. There’s very little build-up to the secret of the cobras. And Monk is misidentified as “Monk” Blodgett rather than Monk Mayfair (full name: Andrew Blodgett Mayfair). Coupled with the bland Sparling art, it’s quite forgettable. I imagined I’d have enjoyed it if I’d read it as a kid, but I suspect that if a series had followed, I’d have found better comics to spend my money on.

One response to “The Bronze Key: The Other Doc Savage (#SFWApro)”