The Other Shadow (#SFWApro) 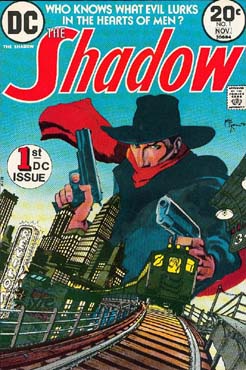 The Shadow, the pulp’s most successful hero, has had a long run in comics. Having browsed through my collection over the past year, I figured I’d give the various treatments a review, though it’s even more incomplete than my Doc Savage comics (for the record I have no intention of starting a reread of the Shadow pulps any time soon).

One thing I should make clear, the Shadow of the radio show was different from the pulp hero. The radio Shadow had “power to cloud men’s minds” and render himself invisible. The pulp Shadow could blend into the darkness with ninja-class skills, but he didn”t actually have the power of invisibility. The comics typically combine the two in some fashion.

The earliest comic-book Shadow I’ve seen was Archie’s version in the Silver Age (there was a Golden Age comic but I’m not familiar with it), which turned the Shadow into a costumed super-hero with hypnotic abilities. I don’t remember it (I read the last issue) but most reviewers and comics historians say that’s a good thing.

The first one I read regularly was DC’s Bronze Age Shadow, which ran for 12 issues (cover by Michael Kaluta, all rights to current holder). Written by Denny O’Neil and drawn by Michael Kaluta used the Shadow and a few of his agents (Margo Lane, Harry Vincent, Shrevvy, Burbank); adapted one Shadow novel (The Freak Show Murders—and like Marvel’s Doc Savage adaptations, tried to squeeze too much into too few pages). The first half-dozen issues were good entertainment, particularly “Night of the Ninja” in #6—my first encounter with the ninja concept and a good story (an apparent ninja hunting down mobsters turns out to have a hidden agenda). After that the quality dropped off, and Frank Robbins took over from Kaluta; his art didn’t work quite as well and I wonder if the team simply didn’t gel the way O’Neil/Kaluta seemed to. Mike Barr provided a later high point in #11 where the Shadow’s arch-foe Shiwan Khan pitted the “master of darkness” against another pulp hero, Richard Henry Benson, AKA The Avenger (DC had the rights to him too at the time, though his series only lasted four issues).

There were some sort-of clever ideas that never worked for me, such as the Shadow ordering one agent, who’s screwed up badly, to take a “rest cure” (cue ominous music). For me, it cheapens the Shadow to have him do anything beyond glare and mutter “You failed me.” And I don’t think O’Neil really cared about the pulp source material the way Barr seemed to in his one scripting job, the same dynamic that played out when O’Neil and then Barr tackled Doc Savage a couple of decades later.

DC also did two crossovers with Batman during this period. In one, the aging Shadow comes out of retirement to size up his successor; in the second, he helps Batman overcome an old trauma. They’re both good. DC’s next Shadow series, by Howard Chaykin … was not. Stay tuned.

3 responses to “The Other Shadow (#SFWApro)”