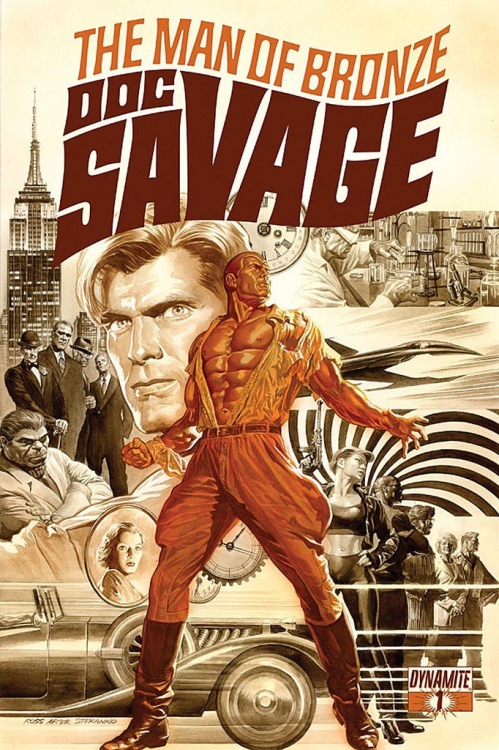 So as it turned out I was able to pick up a copy of the Doc Savage Omnibus from Dynamite a lot sooner than expected. I’d picked up the first issue when it came out (cover by Alex Ross, all rights remain with current holder), hadn’t been impressed, but after rereading the Millenium and DC versions with their variant takes, I felt much more open to the idea of a series following Doc from the 1930s into the present (staying young by use of the silphium from Fear Cay, an idea proposed by Philip José Farmer). Unfortunately the story by Chris Roberson and Bilquist Everly disappointed me, never catching fire.

The first issue has the villain using a violence inducing radio wave to turn ordinary crowds into angry mobs — an effect Doc himself discovered when doing initial research for “curing” crime at his secret “college” (see The Annihilist). The college is the closest thing to a narrative spine: one villain gets sent to the college and tries to take it over, then in the last two issues, it becomes public knowledge: Doc Savage, living legend, is performing some kind of lobotomies on crooks!

Unfortunately, the in-between adventures are just sort of there. They don’t have any strong villains, and while they’re linked thematically (Doc’s efforts to expand his organization and reach as the world gets more complex, vs. the ability of hackers to take down whatever system he sets up), it’s not really a strong enough theme. Other than seeing what Doc can do in the age of Internet and space flight, there’s not much to them. Nor does Roberson do much with the subtext that the world is increasingly dependent on Doc and his operation.

The Crime College climax is also lacking in ooomph. We get two pages of a senate hearing (the senators are outraged, Doc remains convinced his methods are right) and then we’re off into the big adventure (some “cured” crooks launch a doomsday attack using the radio signal from #1). I would actually have liked to see more talk and less action, or different action: As Doc admits what he’s been doing, is nobody going to arrest him? Or even talk about it? Or is he, so to speak, too big to fail? Would the right wing object that Doc’s policy is anti-death penalty (heck, he’s already anti-gun)? Would there be people who supported it?

The Doc Savage annual has a throwback story in the 1930s (slightly before Man of Bronze), which seems to hint at a family feud between the Savages and the villainous Science Society (curiously, both Millenium and DC used the idea of a blood feud in one story each). It’s okay, but then comes the sequence where Doc is shown bedding a beautiful girl between adventures. I can accept Doc not being a virgin when his published adventures start, but I can’t buy him being suave or comfortable around women as he’s shown here. Everything in the published adventures makes him look as awkward with women as the stereotypical high-school nerd.

I doubt I’ll pick up volume 2 if Dynamite makes it that far.

One response to “Bronze Dynamite: The Other Doc Savage (#SFWApro)”