Meanwhile, over in graphic novels (#SFWApro)

JUSTICE LEAGUE: The Trinity War by (primarily) Geoff Johns (with multiple artists) collects one of DC’s New 52 Big Events, as the immortal Pandora discovers her accursed box has actually infected Superman, leaving the Justice League (and the Justice League of America and the Justice League Dark) scrambling to destroy the box and save the Man of Steel. This is very lively and entertaining at first, but the problem with sprawling over multiple series and minseries is that ultimately it becomes unwieldly (I also hate the New 52 Phantom Stranger’s origin, but that’s not Johns’ fault). A bigger problem is that much like Johns’ Green Lantern work, this huge arc doesn’t end, it just feeds into the next big event (it doesn’t help that the villains for that, while powerful, don’t really top what the League is facing here). So a regretful thumb down.
FISHTOWN by Kevin Colden really fell flat for me. The story of a bunch of hard-drinking, hard-doping, hard-screwing teens, the murder they commit and the investigation feels like umpty-zillion movies and TV shows (River’s Edge took similar material and did better) about bad teens behaving badly. Color me unimpressed 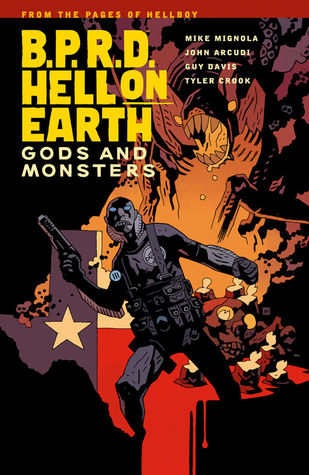 BPRD HELL ON EARTH: Gods and Monsters combines two miniseries titled yes, Gods and Monsters (both already in my Hellboy Chronology). Where the previous book, New World showed things not terribly worse than usual, here everything is falling apart as armies of worried drifters begin criss-crossing America looking for safety, monsters attack at random and the BPRD still has to deal uneasily with Abe’s possible role in the world’s transformation. The second miniseries has Liz discover that despite wiping out the entire frog race and retiring to a trailer park, the world still needs her. Overall, these feel more like seeding for future plots than standing on their own. Written by Mike Mignola and John Arcudi, art by Guy Davis and Tyler Crook (cover by Mignola, rights with current holder)

2 responses to “Meanwhile, over in graphic novels (#SFWApro)”