The Other Doc Savage #2: Marvel’s black and white era (#SFWApro)

Marvel’s first Doc Savage comic folded in 1974, but Doc did not fade away. Within a year he was back in one of Marvel’s black-and-white magazines. 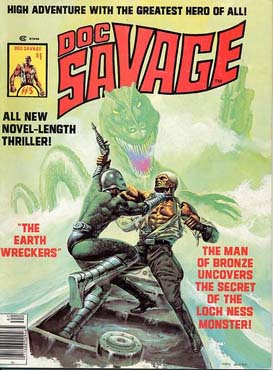 Marvel’s magazine line began in the early seventies and largely died at the end of the decade (Savage Sword of Conan kept on rolling, of course). Magazines got displayed in drug stores and supermarkets with other magazines instead of with comic books, hopefully drawing new readers (remember this was the days before dedicated comics stores were the norm). They weren’t subject to the Comics Code, which didn’t affect Doc’s adventures but Conan sure took advantage (a number of stories showed hot women walking around topless). And the cover price was higher, which made them potentially more profitable for both the store and the company. As it turned out, most of them didn’t have sales to justify continued publication.
Doug Moench wrote all Doc’s magazine stories, with Tony deZuniga providing most of the art (the cover here is by Ken Barr, all rights with current holder). Unlike Marvel’s color comic, all the stories were new and Moench dependably delivered plenty of slam-bang action, pulp thrills and pulp SF weirdness every issue. Egyptian gods suck the air out from a small mining town. A madman builds a model of the globe that will trigger a doomsday bomb. A criminal destroys skyscrapers from the air with lightning blasts. A slithering octopoid horror drains men’s brains of knowledge and drives them to suicide. They also planned for a clash between Doc and Fu Manchu (Marvel was already using Fu Manchu in another series, Master of Kung Fu) but the rights couldn’t be worked out.
On the downside, Moench makes a lot of errors. His Doc carries a gun regularly; even in one story where he wears his vest full of gadgets, he still relies on a gun. While Doc was an expert with a pistol (of course. Doc’s an expert at everything) he didn’t carry one. There were also some chronology errors (a reference to Orson Welles’ War of the Worlds broadcast two years too early) but the letter-column said those were an aesthetic choice (the story in question had to be set in 1936, and the Welles reference seemed to good to miss) so that’s a little more defensible. The only real clunker was #6, which spends way too much time discussing the mystic properties of pyramids, a popular pop-science idea back in the day. And that made up for it by having my letter in the letter-column, waa-hoo!
The art was good, but never got Doc’s team right. The thing is, most of them look freakish and Monk’s the only one where deZuniga (or others) captured that: Renny’s hands aren’t big enough, Johnny’s not skeletally lean enough and Long Tom doesn’t look frail enough (though “frail” is a hard thing to convey visually I think). That aside, the art was excellent.
Along with losing out on Fu Manchu, plans to resurrect Doc’s arch enemy, John Sunlight, fell through when the final issue had to be a fill-in job (I don’t know why)—an entertaining story, but Sunlight would have been awesome.
After announcing plans for a series of short backup features spotlighting Doc’s aides, only the Monk episode saw print. I’m guessing the essays about Doc that got published instead were cheaper to run.
It was a fun run to reread (and available in TPB from DC, during the period it had the rights to Doc for First Wave). Next up, DC’s 1980s comic, which takes Doc and his friends into the modern world.

3 responses to “The Other Doc Savage #2: Marvel’s black and white era (#SFWApro)”