THE SUN AND THE MOON: The Remarkable True Account of Hoaxers, Showmen, Dueling Journalist, and Lunar Man-Bats in Nineteenth Century New York by Matthew Goodman, tells how in 1835, New York’s first one-cent paper, The Sun ran a series of satirical articles reporting the great astronomer Sir John Herschel’s discovery of life on the moon (even intelligent life) had thousands of Americans convinced this was the real deal (Goodman explains the “pluralist” view God must have put people on all those other planets was common back in the day). A good look at the cut-throat newspaper business of the time (and what a novel thing coverage of trials and police cases was) as well bringing in Edgar Allen Poe (who believed the articles were based on a story of his own, and later tried a similar hoax for the sun) and PT Barnum (who doesn’t really tie in other than an example of the arch-hoaxter of his era). Entertaining.
As TYG grows backyard tomatoes, I picked up RIPE: The Search for the Perfect Tomato by Arthur Allen, which looks at the history of the vegetable-that’s-a-fruit (a status that has decided actual court cases), its current status as both popular edible and industrial product (China’s state industries mass produce tomato paste for export) and the eternal debate over farming methods and whether modern tomatoes taste as good as the good old days. Allen thinks part of the dispute is that people judge tomatoes intended for flavored sauces and paste as if they were for eating, though he also has several tomato farmers insisting that people really prefer bland tomatoes. Pretty good. 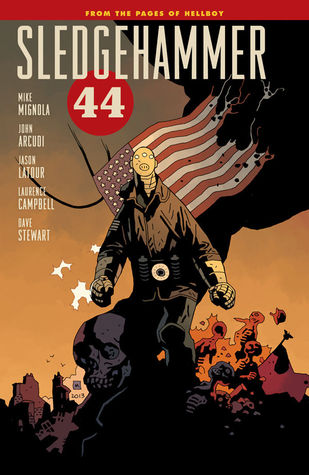 SLEDGEHAMMER 44 by Mike Mignola, John Arcudi, Jason Latour and Laurence Campbell (cover by Mignola, rights with current holder) started because veteran comics artist John Severin (who worked on one of Mignola’s Witchfinder series) said he’d be up for drawing a WW II-related, but he died too soon to get more than a couple of pages done. The first story, in which an American GI in 1944 winds up inside the vril-powered suit from Iron Prometheus, is pretty weak. The follow-up, in which “the Hammer’ takes on Nazi villain the Black Flame to save an American pilot is much better, a lively slam-bang tale (and yes, both these will be added to the Hellboy Chronology as soon as I finish this post). Though I’m unclear who the mysterious voice talking to Redding in the finish is supposed to be, it’s a nice finish, emphasizing Mignola’s fondness for the regular guy doing his job (even if the job is walking around in armor trading ray-blasts with Nazis).

One response to “Books and Graphics (#SFWApro)”