Back in 1968, when I bought comics only occasionally (the money woes of a 10-year-old), I kept seeing ads asking “Bat Lash—Will He Save the West or Ruin It?” It was an intriguing question, but I had no idea who Bat Lash was (remember, this was pre-Internet) until running into him in Weird Western Tales a decade later. But recently I picked up the Showcase Presents Bat Lash TPB and discovered what all the fuss was about. 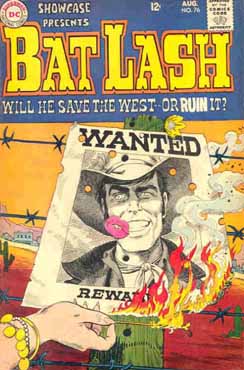 (Cover by Nicholas Cardy, all rights with current holder)
Bat Lash debuted back in the days when comics Westerns were as wholesome as Roy Rogers. Johnny Thunder, the Trigger Twins, the Western Ghost Rider (no relation to the biker) and Two-Gun Kid were straight arrows, even if some of them were outlaws. Batton Lash? A Southern charmer who gambled, cheated when he had to, smoked, womanized, enjoyed (and could cook) a fine meal. A man who was quite willing to lie, steal or con his way into or out of trouble, or shoot his way out when it was necessary (much as he declared that he was a peaceful man who hated such things).
In the grand scheme of Westerns, this wasn’t revolutionary. Bat wasn’t that different from TV’s Bret Maverick (James Garner) except for his willingness to use violence, and Maverick had been on the air since the 1950s. But for comics he was something novel.
Unfortunately he was also unsuccessful. After his debut in Showcase, he won his own series, which failed after seven issues. Reading the TPB, I’m not entirely surprised. Joe Orlando said some years later that while Nick Cardy was an amazing artist, his work here went for broad comedy when a black humored or ironic tone would have worked better. If anything, Orlando understated: The work looks in many places like Sergio Aragones’ (who wrote several issues) Mad cartoons, whether because Cardy copied his style or Aragones added some uncredited art. And it doesn’t fit at all.
That said, there’s no guarantee better art would have made a difference. DC cancelled lots of comics in the late 1960s. But I do think if it had been a few years later, Bat would have done better.
What happened in between? Jonah Hex, a scarfaced, ruthless bounty hunter who debuted in Weird Western Tales. Like Bat Lash, he was completely different from the usual Western comics, but unlike Lash, he was a hit, running for years (and he’s still having adventures in the New 52). 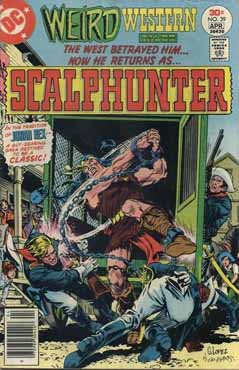 (cover by Jose Luis Garcia-Lopez, all rights to current holder)
After Hex got his own book, a new series, Scalphunter, replaced him in WWT. The protagonist was Brian Savage, a white baby raised by the Kiowa, who called him Ke-Woh-No-Tay, “less than human” (I think that’s it). The “white raised as an Indian” was an old trick to make Native American protagonists acceptable, but it didn’t bother me here—mostly because Brian never considered himself anything but a Kiowa. Making him white, I think, was just to rationalize his involvement with the white world; reading now, I think they could have found a way to get the same involvement from a born Kiowa, but I still like the series.
While I’m not a Western fan, Scalphunter, after Gerry Conway took over the scripting, didn’t spend much time on the frontier. He went east looking for his long-lost sister, then found himself embroiled in the Civil War—thwarting an assassination of Lincoln, clashing with a war correspondent and, as noted above, running into Bat Lash. They were friends, though invariably Bat would seem to double-cross Brian at some point (it would always turn out he had a perfectly good reason).
Another thing I liked about the series was that it had some of the same harder edge as Jonah Hex. In one of the first stories I read, Brian’s interrogating some criminal scumbag; after the guy coughs up the information, Scalphunter just hurls him aside without further interest and the man (as far as I can tell) breaks his neck. The utter casualness of the act was kind of shocking.
Scalphunter folded by the end of the 1970s, but I reread them recently (as a follow-up to the TPB) and they hold up well.