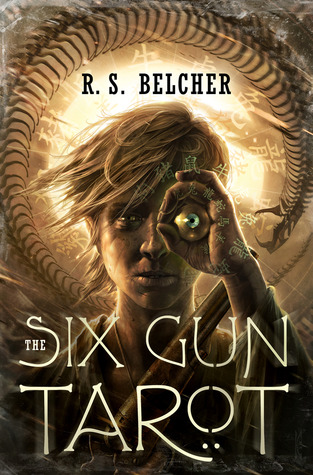 SIX-GUN TAROT by RS Belcher (Cover by Raymond Swanland, all rights to current holder) is the strong start to a “weird Western” series of historical fantasies.
Jim, the 15-year-old protagonist, is fleeing a murder charge (abusive stepfather) when he rides into Golgotha, an isolated town on the edge of the desert. As we soon learn, the town is a Hellmouth with something terrible lurking in the old silver mine for someone to awaken it. This has in turn drawn an equally weird population: A sheriff who’s been hung three times without dying, a shapeshifting coyote for deputy, a man keeping his wife’s disembodied brain in a jar, a fallen (or at least semi-retired) angel and a member of a cult of female assassins. And the new preacher in town is determined that what’s in the mine will wake …
What I Learned: Weird is better. Not that this is a new insight, but bizarre usually works out better than mundane. Which is one of the advantages of magic over SF: Belcher’s book was way more enjoyable than the steampunk alternate histories of Cold Copper or Dreadnought. The plot of a sleeping god brought back to life is not new. It’s the general weird atmosphere and strange details (like a reference to the previous sheriff being skinned, then his skin sewn up again stuffed with sand) on top of the plot that makes it stand out from the pack.
•Isolation Is Scary. Another advantage Belcher’s tale has over the other two books mentioned is that Golgotha is really out in the boonies, cut off from the world. Cut off from help. And even within the town, the number of people who can actually act against the evil is small. That makes it easier to ratchet up the tension and the obstacles.
•Language isn’t everything. Belcher’s biggest weakness is that he has a tin ear. Angels throw around terms such as “parsecs” which feel really out of place in a fantasy. One character uses “scam” which wouldn’t be a word until the 20th century (“Humbug” would have done the job for the period). The female assassin-cult’s burden is called “the Load” which just doesn’t sound right.
While that’s a negative, it’s a minor negative for me. While some critics have expressed the view that some kind of poetic language is essential for good fantasy (Ursula LeGuin, for instance, IIRC), I’m not one of them. This is a good fantasy, even if the words are sometimes clunky. But it is a negative, so I’ll draw the lesson that it’s better to have good language than not (I never assume people will forgive flaws in my work as much as they will someone else’s).
•Enough With Lovecraft! Much as I love HP Lovecraft, he can be overused. Here, for example, the Lovecraftian chants and occasional references don’t really add anything to a mythos which works perfectly well without them. Instead, they just annoyed me. It makes me appreciate Mike Mignola’s Hellboy where the mythos is clearly Lovecraft-influenced but also entirely original.
•Titles should make sense. There’s no Tarot in the book. Each chapter references a particular Tarot card but as I’m not about to go read up and see what they signify, that doesn’t add anything to my appreciation for the book.
Despite the flaws, I’m really looking forward to Book Two.

Filed under Is Our Writers Learning?

4 responses to “Is Our Writers Learning? Six-Gun Tarot (#SFWApro)”