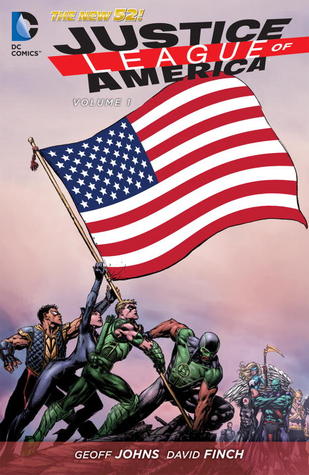 Given how little I care for Geoff Johns’ Justice League, I was surprised I enjoyed JUSTICE LEAGUE AMERICA: World’s Most Dangerous by Johns and David Finch. The premise is that government officials Amanda Waller and Steve Trevor recruit a team that will focus more on America’s interests and (if necessary) take down the more globally oriented League. The mix of personalities works better here than in Johns’ Justice League stories, but the plot suffers from being a lead-in to of one of DC’s Big Events (the last couple of chapters are really confusing). Still, I enjoyed it.
THE SIXTH GUN: Crossroads by Cullen Bunn and Brian Hurtt is a historical fantasy set in the 19th century where the protagonists in the first volume of the series became the possessors of five accursed guns destined to bring on the apocalypse. In this volume, the inevitable array of McGuffin hunters shows up seeking control of the guns, along with a malevolent loa. Quite enjoyable—and happily the Durham Library has several more volumes.
BPRD: The Plague of Frogs by Mike Mignola and Guy Davis has the the BPRD crew discover that the alien growths they scoured from Cavendish Hall in Seed of Destruction have return. Liz, Roger, Abe and Johann confront an apocalyptic cult in a small town, but can they stop the monsters from spreading? A turning point, shifting into the battle against the Ogdru Jahad that bas kept the BPRD occupied ever since. This also begins the first hint of Abe’s secret past. And yes, it’s now in the Hellboy Chronology.
WONDER WOMAN CHRONICLES Vol 2 by William Marston and Harry G. Peters shows Marston’s script-writing abilities continue to improve as Wonder Woman battles against the power of Mars and his disciples while at a more human level, battling (and ultimately reforming) Nazi spy Paula von Gunther. Good, though Marston’s bondage themes may not be to all tastes.

One response to “Comic books (#SFWApro)”