No movies due to last week’s schedule madness
UN-AMERICAN WOMANHOOD: Antiradicalism, Antifeminism and the First Red Scare by Kim E. Nielsen looks at how anti-communist paranoia of the 1920s convinced large numbers of conservatives that suffragettes and feminists were at best dupes of the Bolshevik Menace, at worst willing co-conspirators, as their opposition to male dominance posed a threat to the manliness and family structure that America’s strength depended on. It was widely believed that along with abolishing private property, the Russian Revolution had deprived husbands of their property rights in their spouses—which meant not female independence but all women becoming state-owned (and supposedly ending up in state brothels as sex slaves). Likewise, left-wing opposition to child labor was seen as directly undercutting a father’s right to control his children. As someone who blogs about feminist issues, it’s really fascinating to see how the property rights of the husband were taken as a given by so many people back then; a good book. 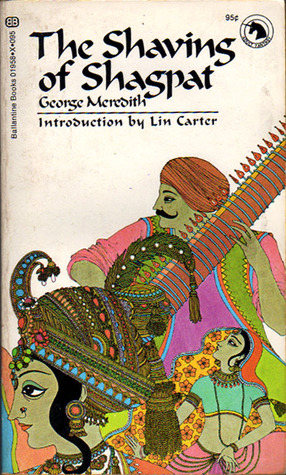 THE SHAVING OF SHAGPAT by George Meredith (cover by Ray Cruz, arts by current holder) is another of Ballantine Books Adult Fantasy series, a 19th century Arabian Nights tale in which hapless barber Shibli Bagarag discovers the reason barbers have become pariahs is the Ultimate McGuffin hidden in the hirsute face of the merchant Shagpat, bringing the entire world under his influence (so barbers becoming outcasts shields Shagpat from any risk of being shaved). However Shibli learns that if he can gather the right mystic talismans and a powerful blade, he can be the one to accomplish the title feat. Lush and entertaining, with some nice poetic touches (“His eyes were like two hollow pits dug by the shepherd for the wolf, and the wolf in them.”), though a bit too much poetry (Meredith’s initial publication came as a poet). And if you dislike fantasy versions of the East written by Europeans (I know some people hate that), this definitely isn’t for you.
THE WORLDS OF JACK VANCE is a short story collection by the recently deceased writer, the best of which is probably “The Moon Moth,” for its bizarre honor-bound alien culture. Close behind it is “The Brains of Earth,” a novella in which a scientist discovers Earth is trapped between two different alien mind-parasites (amusingly, when the protagonist gains psychic powers to fight them, his decision is not to go public until his powers help America win the Cold War!). In other stories, reality goes haywire, we learn what it takes to lead the Milky Way galaxy and ecoterrorists battle to take over an alien world. Vance’s flair for oddball cultures and his distinctive writing style are well displayed here.