Last month, I mentioned DC’s 1970s Blackhawk series as an example of a series undone by shifts in editing and direction. Flipping through the issues again, I now realize Gerry Conway was the editor for almost the entire seven-issue run, so that’s probably not the case. Still, having marked the series as worthy of a post, I shall proceed to post.

First, some background: The Blackhawks debuted in Quality Comics Military #1. In the origin, Blackhawk, a Polish military pilot, sees his family killed by a German bomb dropped during the German invasion of Poland. His country and his kin destroyed, he vows to keep fighting and recruits a team of pilots to operate against the Axis independent of the Allied governments (when I read this in reprint in the 1970s it seemed pretty outlandish, but now that I know about pilot groups such as the Flying Tigers, it actually seems plausible). The membership eventually coalesced into Hendrickson, Olaf, Chuck, Stanislaus, Andre and Chop-Chop (initially the Chinese cook, later a full team member), plus their leader.
After the war, the Blackhawks eventually shifted to DC and mutated into a super-heroesque team, battling villains such as King Condor and Killer Shark. The long-running series died at the end of the sixties after DC tried turning them into actual super-heroes (Monsieur Machine, the Leaper, Golden Centurian, Dr. Hands, etc.). 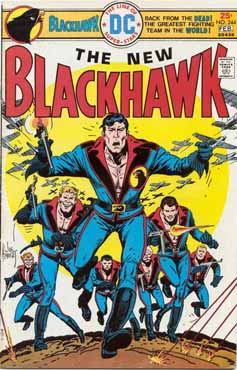 Written by Steve Skeates, the seventies revival got back to basics. In the first issue we learn Blackhawk now runs a multinational corporation that employs most of the team in day jobs; away from work, they operate as a mercenary team——ethical, but charging $1 million per job (we never learned what they used the money for). We met their US government contact, their chief rival (Patch, a female mercenary) and work in a plot to boot, which made for a busy, but not overcrowded first issue.
About three issues later, David Anthony Kraft——one of my least favorite writers of the period——took over for a story involving a battle against Biolord, a computer dedicated to wiping out humanity to save the environment. It was not very good——though some elements I dislike, such as the CIA contact being Biolord all along, may have been planned from the first for all I know (just because I dislike Kraft’s writing doesn’t mean it was all his fault).

Things picked up the following issue (different scripter) when Blackhawk went up against a more Blackhawk-ish foe, a SPECTRE-style secret society. They picked up a lot when Skeates returned for the last issue, with a better use of Patch and her team and the return of both Killer Shark and the War-Wheel (a giant rolling tank visible behind Killer Shark on the cover). Skeates laid the seeds for future stories (including Hendrickson’s daughter stepping into his slot with the team) but sales weren’t good and this was the last issue (I doubt any change in the writing staff would have affected that).
What jumped out at me when I reread these was the last-issue text page announcing that immediately following that issue, Blackhawk disbanded the team for good: Hendrickson had been sidelined with a heart attack, Chuck was dead, Chopper critically injured and the Empire of Death defeated, so it was time to quit.
Naturally I assumed this would be no more permanent than any other comics death or team disbanding …but I was wrong.The next Blackhawk series was a WW II-set retcon; this would be the Blackhawks final present-day appearance before the Crisis on Infinite Earths reset everything.
Even though I’m not the world’s biggest Blackhawk fan, I find myself oddly sad at this.