Undead Sexist Cliches: If You Don’t Want To Get Pregnant Don’t Have Sex

Back in 2012, Foster Friess — yet another big-money guy backing right-wing candidates — was asked in an interview whether his preferred candidate for president, Rick Santorum, would sink his candidacy by things like his absolute opposition to contraception (Santorum is a devout Catholic). Friess’ response: “Back in my day, they used Bayer aspirin for contraceptives. The gals put it between their knees and it wasn’t that costly.” In other words, just press your legs together — i.e., no PIV sex — and you won’t have to worry about contraception. Rush Limbaugh made a similar remark about college students who couldn’t get contraception (background here).

Trouble is, saying that would coolide with he deep-rooted right-wing conviction (though the view is not unique to them) that women shouldn’t have premarital sex. Only nymphomaniac sluts use birth control! Men opting for sterilization are immature. Having sex without the risk of pregnancy is bad! Quite simply, they don’t think women should have the option to refuse pregnancy. Having the right not to reproduce is a baaad thing.

They also don’t think women as a rule, should be able to say no to sex. If you’re married and you don’t want a kid, too bad. Phyllis Schlafly, among multiple other conservatives, believes wives can’t say no to sex. “I think that when you get married you have consented to sex … That’s what marriage is all about, I don’t know if maybe these girls missed sex ed.” Schlafly is dead but marital rape denial carries on. And on: Texas State Senator Jonathan Stickland said in 2009 that ““rape is non-existent in marriage, take what you want, my friend!”

This ties in with the common belief that a woman should put out for her husband even if she’s not into it. Just lie there and let him have his fun — it’s your duty!

Religious conservatives rate premarital sex as very, very bad, but that doesn’t mean right-wingers support the woman if she says no; instead they side with the rapist. Right-wingers don’t really support saying “no” outside of marriage because they side with the rapist. If, say, the rapist assaults a drunk woman it’s her own fault. As with other things rape-related we don’t apply that standard to other crimes: nobody claims that if I steal a guy’s wallet while he’s passed out drunk, his decision to drink is all that matters.

Rape culture beliefs of this sort give rapists a green light. At Liberty University, for instance, rape investigations focus on the woman’s behavior and whether her actions were impure rather than punishing the rapist. If “she was drunk” gets the rapist off the hook, then men have a green light to rape any woman when she’s intoxicated. Making it easier for men to rape makes it harder for women to say no.

Unfortunately for far too many right-wingers, the bad thing about nonconsensual, coercive sex (as Slacktivist puts it) isn’t the coercion or the lack of consent, it’s the S-E-X. 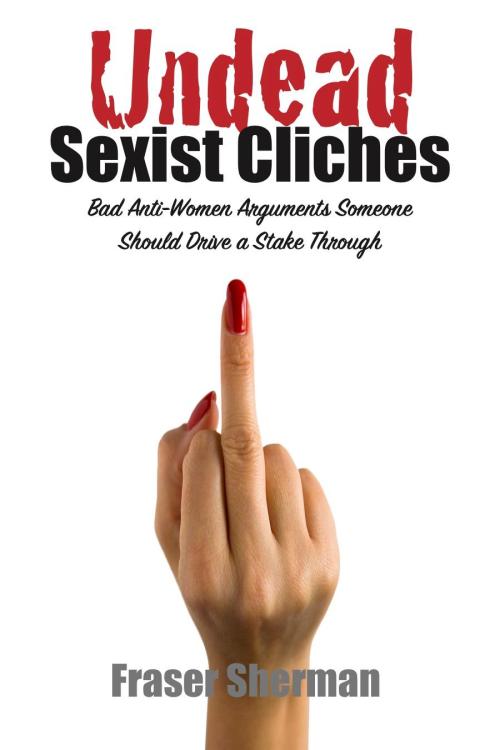 I go into these cliches in more detail in Undead Sexist Cliches, available as a Amazon paperback, an ebook and from several other retailers. Cover by Kemp Ward, all rights remain with current holder.