ALIEN TRESPASS (2009) is a pleasant pastiche of 1950s Alien Visitor films with Eric McCormack as a pipe-smoking professor temporarily possessed by an alien cop to hunt down its escaped prisoner. This, however, leads to both the professor’s wife and a pretty student getting thoroughly confused by his behavior; meanwhile, teenagers spot the monster but can’t convince the cops. A low-key pastiche, this is more enjoyable than Mars Attacks! However in a time when the real deal’s available on DVD or YouTube, I’m not sure there’s any point to this either. “What we saw out there on the butte was a common variety meteor. Case closed.” 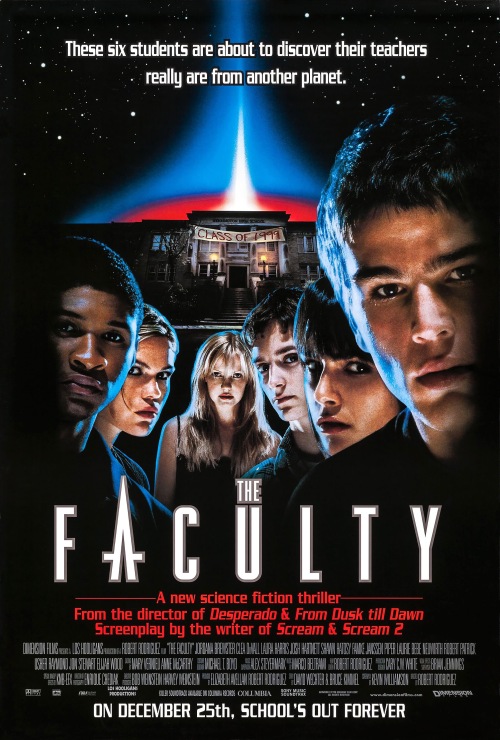 THE FACULTY (1998) is a flawed but fun film in which  handful of teen outcasts (including Josh Hartnett and Clea Duvall) plus Alpha Girl Jordana Brewster discover alien parasites have taken over teachers Robert Patrick, Bebe Neuwirth, Piper Laurie and Famke Janssen.  And of course, they plan to infect everyone else.

This is an effective Body Snatcher film and Famke Janssen is outstanding. She starts out in bad hair and glasses, then metamorphoses into Sexy when she gets taken. That’s an old shtick (“Why Miss Janssen, without your glasses — you’re beautiful!”) but she makes it work with body language. At the start she radiates shyness and social awkwardness, then she becomes almost swaggering, telling Hartnett that “I’m going to shove my foot so far up your ass you’ll be nibbling my toes until graduation.”

Another problem is that Kevin Williamson name-checks Puppet Masters and Invasion of the Body Snatchers but apparently he hasn’t read them. Neither book involves defeating the invaders by killing their queen (Williamson may be thinking of the Puppet Masters movie in which they’re a hive mind) and the Finney novel is not a knockoff of the Heinlein (I’ll spare you the details).

As a Kids vs. Aliens film, it’s interesting to compare with 1958’s The Blob. There the teens’ problem is that nobody believes them about the monster because they’re teens and considered borderline delinquents; here, it’s all about their personal crises. Hartnett’s a brain/drug dealer with a bad family life, the high school quarterback wants to quit football and try academics, Stokely (the Duvall character) is an outcast by choice (sort of) and so on. It’s reminiscent of Buffy but more upbeat about the square pegs eventually finding they can fit comfortably into round holes. “This is where your land of fiction gets it right. We win — end of story.”

EYES BEHIND THE STARS (1978) is a Spanish film of very little interest, concerning the Men in Black trying to repress a photographers proof UFOs Are Real. I used it as a talking lamp and don’t regret it.

I realized I’d never seen it before (I’d confused it with Mira Sorvino’s Mimic for some reason). This has Ben Kingsley as scientist who’s not only Mad but also Stupid — after aliens contact him with useful scientific info, he decides their attempt to create human/ET genetic hybrids can’t possibly turn out wrong. Spoiler: it turns out wrong. It’s a version of the Midwich Cuckoos approach to conquest — grow your own kind on the target planet and let them do the work. So we have alien hybrid Natasha Henstridge trawling single bars in the hopes of getting a bun in her oven (Invasion of the Bee Girls would make a good double bill). Despite a cast that includes Marg Helgenberger and Forrest Whitaker, this is a gory and uninspired mess. Three sequels followed. “We decided to make it female so it would be more docile and controllable.”

THE ALIENS (2018) turned out to be completely off-topic for Alien Visitors as it concerns a UFOlogist carrying on his father’s research by spending every Saturday night waiting in the desert for the aliens to come. Only he’s gotten a date who doesn’t think he’s a total loser, and he’s met another cutie schlepping illegal aliens across the border — is his life turning around? A character study/rom-com rather than SF, but a cute one (though there’s an attempted rape scene I could have done without), showing such films don’t have to be Aliens vs. GUFORS.