Two noteworthy failures: LGX: Tempest and the Golems of Gotham 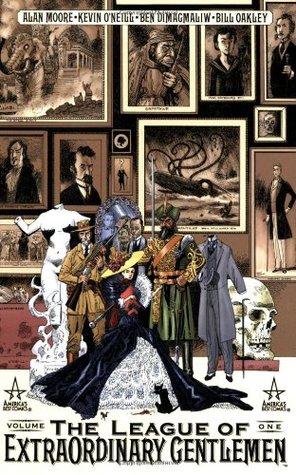 When League of Extraordinary Gentlemen debuted, it blew me away. The final volume, Tempest, barely rates a “meh.” Creators Alan Moore and Kevin O’Neill (who did the cover here) didn’t stick the landing, but then the series has been on a downward path for a while. I don’t think I actually hate Tempest as much as Century: 2009, and there’s maybe less rape than usual, but that’s hardly a thumbs up.

The plot pits Mina, Orlando and Emma Peel against James Bond, who’s recovered his youth in the waters of Kor. While Emma tries to take out Bond, Mina recruits Jack Nemo to reach the Blazing World and Prospero. It turns out Prospero has his own plan for the world, however, and it’s finally coming to a climax. A second plot involves the Seven Stars, a team of public domain British superheroes Mina organized in the 1960s (cue Moore’s tedious grumblings about how worn out and overdone superheroes are). This storyline comes off like a parody, but it isn’t funny.

The plot threads multiple increasingly, complicated with flashbacks, until I lost track of who was doing what to whom.  There’s more heavy-handed name

dropping, like a pointless imitation of Sheldon Moldoff’s cover for “Robin Dies at Dawn” which serves no purpose. And much like Black Dossier, the good guys are ultimately useless. Ultimately they abandon Earth to its fate and go ff to have fun among the stars. The final chapter has Moore and O’Neill snickering at readers for wanting more “Bloomsbury Justice League” and other things (though they pass over readers who dislike the rape elements and the racial stereotyping). The results weren’t good but I’ve added them to my LGX Timeline nonetheless.

Thane Rosenbaum’s THE GOLEMS OF GOTHAM has a teenage girl, Ariel, create a golem and summon her grandparents — Holocaust survivors who killed themselves before she was born — to occupy it (she bases the combination of letters used in the ritual on an alphanumeric code derived from the numbers in their camp tattoos). She hopes they can help snap her dad Oliver, a mystery writer, out of his writers’ block.

Ariel summons her grandparents but also several writers’ ghosts, all Holocaust survivors and suicides, who proceed to turn the Big Apple upside down. Smoke reminds the “golems” of the death-camp crematoriums so they remove all sources of smoke. The pinstriped New York Yankee uniforms remind them of camp uniforms so they erase the stripes. Tattoos are contrary to Jewish law so poof, no more tattoos. And Rosenbaum apparently hates feel-good Holocaust films like Schindler’s List (I’ve seen the movie and that is definitely not how I’d describe it) so the golems erase that and other movies (the narration rants that saving Jews is meaningless, it’s the deaths that are important!). They’re also horrified that Holocaust denial is a thing — that’s outrageous, nobody denies the ugly truth about slavery (which was bullshit even then)!

While I’m sympathetic to some of Rosenbaum’s points, such as the hollowness of “never again,” a lot of what he had to say is unconvincing. The novel’s discussion of Art! and how it comes from Suffering! (those writers committed suicide because as artists they couldn’t put away their memories of the camps) didn’t do much better. I don’t think it holds up as a work of fiction, either: the mix of Holocaust tragedy with humor doesn’t work (particularly the sort-of lighthearted ending) . Then there’s an entire chapter where Ariel gives some of the ghosts physical form to enjoy New York but at the end of the chapter Rosenbaum announces none of that happened, it was only a What if. That’s nowhere near as clever as it probably looked in his head.

#SFWApro. All rights to images remain with current holders