After a run of more than 20 years and 300 issues, Wonder Woman wrapped up with #329 and her marriage to Steve Trevor. Following the Legend of Wonder Woman miniseries, the Amazing Amazon started over from scratch in George Perez’s Wonder Woman #1. The first six issues were here origin arc partly written by Greg Potter, then Len Wein, but the plotting and the reboot concepts were all Perez.

The first issue retells Marston’s origin of the Amazons, with some interesting additions. Rather than just magical creations of Aphrodite, they’re created to reincarnate the souls of the countless women who’ve died by the hands of men through the centuries, all preserved in Gaia’s magical womb. As in Marston, they become a force for good, get betrayed by Hercules (and fairly obviously raped), freed by the Olympian goddesses and sent to Themiscrya, where they must redeem their defeat by guarding Doom’s Doorway, a gateway into hell. It turns out that alone among the Amazons, Hippolyta originally died while in childbirth. She’s able to bring her daughter to life in a clay figure, the one and only child of the Amazons.

By the time Diana reaches adulthood, Ares is working to plunge the world into final conflict, whipping up his followers in the U.S. and USSR into a war fever. The Olympian goddesses order Hippolyta to select a champion to enter Man’s World and put a stop to this, and needless to say, it’s Diana. As she prepares to leave, Steve Trevor arrives, one of Ares’ acolytes scheming to destroy the Amazons and get rid of Trevor — an experienced combat veteran, but not a man who has any love for war — in one stroke. Thanks to Diana the plan fails; she takes Steve back to the U.S. landing in Boston (but unlike Marston, not out of love for him). 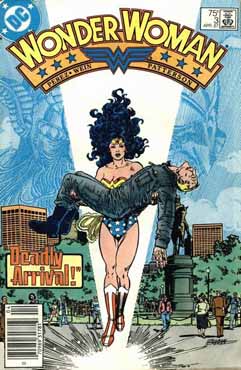 Unlike Marston’s Wonder Woman, Princess Diana is a fish out of water. She doesn’t speak English. Doesn’t understand our customs. Finds modern civilization a little intimidating. She turns for support to Julia Kapatelis, an archeologist with a specialty in ancient Greece. Together with Steve, Etta Candy and Julia, she has to stop Ares’ plans, but as he prepares to go nuclear, literally, will she be able to do it? Especially when his sons Deimos and Phobos set their creation, the monstrous Decay, loose on Boston?

I was totally blown away when I first read this (I know because I have a glowing letter in #7). Not just Perez’ art or the revision of the Amazons’ origins, but his older, more experienced Steve (“I’m not afraid of guns — I’m afraid of some of the idiots our military gives the guns to.”), his capable Etta (in the final conflict, she’s right in their fighting) and the gentle, insecure Diana. Perez doesn’t rush his story or squeeze in any excess fight scenes; it’s not until #4 that Diana goes mano-a-mano with anyone. It felt a little slower-paced on rereading, which is partly because I know what’s coming; Ares’ plans don’t provide as much suspense as first go-round.

And of course, the art is gorgeous. Ares has never looked more formidable.

Overall, though, it’s a solid launch for Diana’s rebooted series. There are two particular changes that I think worth 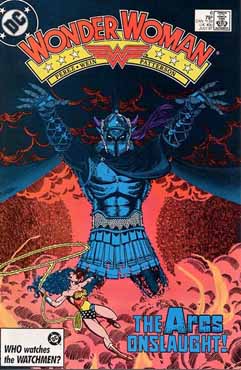 First, that the Amazons remain at an ancient Greek level of science and technology, in contrast to the relatively high-tech Marston Amazons. Marston’s Paradise Island had guns, medical laboratories and a plane for Wonder Woman to fly.  Perez’ Amazons have swords and spears (the gun used for Diana’s “bullets and bracelets challenge has a backstory Perez develops later) and healing poultices.

It’s not that this is bad in itself, but I do wonder about the Amazons staying on that island for more than two millennia and never evolving or changing at all. Greek culture, after all, valued science and the intellectual life (though not for women — Amazons being scholars and not just warriors is an idea I might play with some time) so why shouldn’t the Amazons have developed an advanced science of their own? Maybe a Grecian steampunk so it fits the aesthetic?

The second change is that in ruling out Steve as a lover for Diana, Perez never came up with an alternative. Wonder Woman, IIRC, didn’t get a date until the 21st century gave her a brief flirtation with the superhero Nemesis, then with Superman. Most recently she’s back with Steve (it’s also been established she had lovers on Themiscrya).

I wouldn’t want Diana defined by her love life. I’m pleased she didn’t leave Paradise Island out of love for Steve (Robert Kanigher’s Silver Age run also took Steve out of the decision). But just ignoring that side of her for years (as opposed to, say, declaring she’s asex or that her duties preclude it) feels odd in hindsight.

I’m not sure when the right pausing point is to do another Perez review. I guess you’ll find out when I do.

#SFWApro. Covers by Perez, all rights remain with current holders.