Normally I hate writing on the weekend. However, due to our late night vet visit on June 13th, I was too zonked to get any Leaf done the next day (not to mention Plushie’s cone of shame kept banging into my lap desk). As the two Leaf articles I had in my queue would have expired Sunday, and they were paying extra (an incentive to get everything completed before the project expires), I worked on them Sunday afternoon. Not the best use of downtime, but hey, it’s money.

To claim as many of the remaining bonus-price articles, and a few that were regular price but easy (articles about liquor licensing are surprisingly easy. Liquor boards have good websites), I bulked up on Leaf through Wednesday, completing 12 total (I also did an extra bonus one today). It was easier because (I think) the pressure to get them all done got in the way of sleep so I was up early Monday and Tuesday. As a result, I was able to get the Leaf done and a good chunk of Undead Sexist Cliches.

I’m feeling much better about the book after this week. The division of two and three finally makes sense. Chapter Two is sexist explanations why feminism is unnecessary and why women don’t deserve equality (because evolution made men superior). Chapter Three is the sexist rationalizations why feminism is actively destructive. I also took a lot of discussions of antifeminism and made one small chapter out of them.

I also inserted a lot of notes I’d taken on various books and websites into the post, and added examples for several points I was making, such as some Fox News hosts discussing why men get the blame if they rape drunk women: “the point is that the drunk woman is — she’s just not held accountable for anything. The drunk guy, however, is supposed to make all these amazingly perfect decisions, and not make any mistakes.” As if not raping someone who says no was like performing brain surgery while drunk (I’ll have a blog post on this topic soon).

The additions will require I make another pass to incorporate the new material better. Then I’ll sit down with all the critiques my beta-readers gave me and incorporate them. Then comes writing the finished draft including footnoting everything and indexing everything. Then to publication.

I made the book a priority this week but I found time to start redrafting a story I finished a couple of weeks back, tentatively titled Death is Like a Box of Chocolates. Tentative because much as I like the title, I don’t think there’ll be a box of chocolates in the tale when I’m finished.

Plushie’s eye infection (the one that necessitated that vet visit) has cleared up. We were even able to take the cone off after the first day. We do have a couple of worries about the dogs (nothing serious) but we’ll be talking to the vet about them tomorrow when we go in for booster shots.

All in all, a productive week.

For no reason other than my love of showing cool art, I’ll close with what I think is a neat Ghost Rider cover (the Western one) by Dick Ayers: 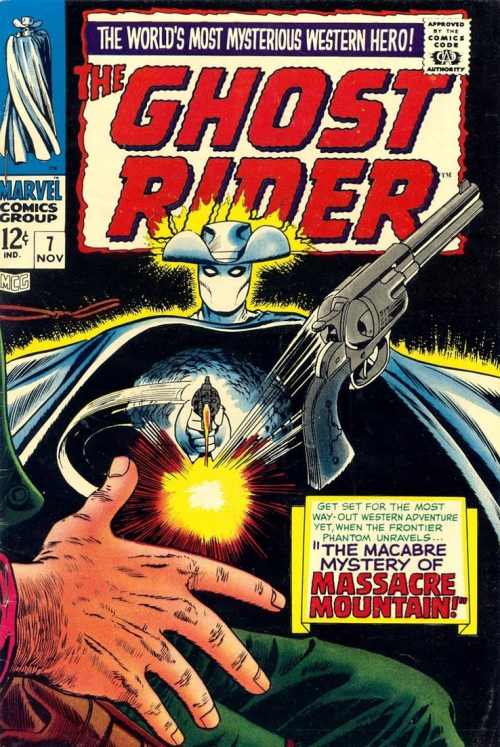