Alan Moore tries taking it back: the Golliwog (#SFWApro)

The weirdest part of League of Extraordinary Gentlemen: Black Dossier when I first read it was the Galley-Wag. A huge blackface figure who comes out of nowhere to save Allan and Mina, babbling insane gobbledygook—and did I mention the blackface? It turns out this was Moore’s attempt to redeem a character from 19th century fiction. 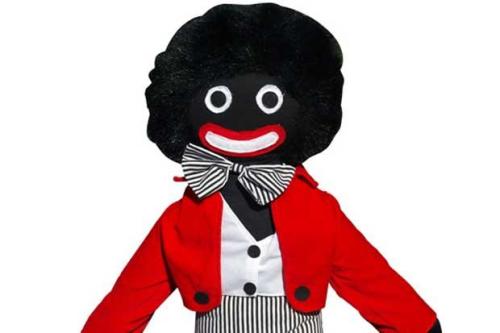 When I first saw Golliwogs in advertisements as a kid (they were in ads for Robinson’s Marmalade, IIRC), I had no idea they were blackface. I hadn’t been exposed to much racist iconography, I just assumed they were funny-looking figures (you can see an example above, taken from Herald Scotland, all rights to current holder). Yes, I was an ignorant kid in some ways.

The original Golliwog was a 19th century fictional creation by Florence Kate Upton. According to Moore, despite the blackface imagery, the character was a strong, positive one, not at all racist (I’ve heard arguments to the contrary, and no idea which is right). By putting the Golliwog in the book as one of the Blazing World’s agents, Moore thought he could redeem the character, restoring him to his non-racist roots. Moore has been very unhappy with people who say he failed, eventually sinking to the time-honored cop-out that apparently it’s just not permissible for white people to write about black people. But I don’t think that’s the problem. Whatever Moore’s intent (and I’m sure it was as he says) and the merits of Upton’s original creation, I don’t think it works.

In a sense it’s a variation of the name-dropping problem I mentioned yesterday: I never heard of the fictional golliawog, I have no reason to go “Oh, good, Moore has restored the original spirit of the character!” All I can go by is what I see, and what I see is this big, freaky blackface character. If the only way to understand what Moore’s doing is to go back and read a 19th century novel, or study the admittedly excellent annotations to LXG by Jess Nevins — well, sorry. Readers are entitled to judge the story by what’s on the page, and what’s on the page is just a golliwog. Other than looks he doesn’t conform to a racial stereotype, but he doesn’t really counter it either.

It’s not like this is a problem unique to Black Dossier or Moore. For instance when Grant Morrison temporarily turned super-hero Mary Marvel into a Dark version wearing spandex and butt floss, some of his fans argued this was not at all sexist — we should see her as an ironic meta-commentary on artists who draw women wearing spandex and butt floss. Even if that was Morrison’s intention (I don’t believe he made the claim himself) it failed: she was still a female character parading around in butt floss. Nothing meta about it. And as I’ve written before, there’s nothing meta about the Yellow Peril stereotypes in the original LXG series. If, as Comics Journal argues, Moore and O’Neil use all the rape and racist tropes to “dare their readers to parse the difference between mimesis and mockery,” I think they failed. The rapes and tropes look just like rapes and tropes, no mockery at all.

Even mockery doesn’t always help. M declaring James Bond a sexist, misogynist dinosaur in Goldeneye doesn’t make him any less sexist. Having Jonni Future (an America’s Best Comics character from a decade ago) comment about how ridiculous it is to have space adventures in a skimpy space suit that bares her ginormous cleavage doesn’t make her ironic or meta — she’s still a massively endowed woman wearing a body-baring costume.

To paraphrase film critics Siskel and Ebert, if something doesn’t work there’s no point to the creator explaining why he had to write it that way.

4 responses to “Alan Moore tries taking it back: the Golliwog (#SFWApro)”